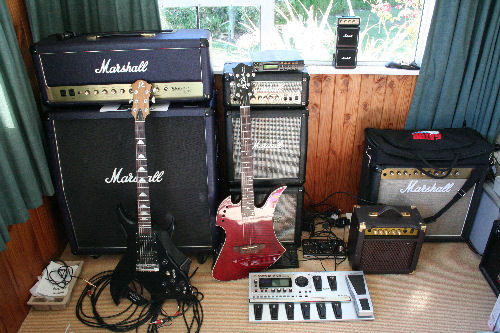 BC Rich; Boss; Marshall...put them together and music is the stuff of life. Below are links to some of my electric instrumental pieces - although I also have quite a bit of acoustic and vocal material that I do but haven't recorded yet.

These are free downloads of demos I've put down - so they're good - but not perfect. My use of a drum machine is not legendary(!) and my bass skills extend to slightly beyond knowledge of root notes. Keyboards? I can't even play 'chopsticks'. If I ever get my act together and find a bassist, keyboardist, vocalist, guitarist and drummer (so, just a whole band to find then), I'll do them again. I'll also add some songs with vocal tracks and see what happens...

In the meantime it's just me, my looper and some tracks I've laid down - which actually sounds kind of cool and takes a lot less organisation :)

Baroque Jungle
I was watching a YouTube clip of a classical music quartet playing a baroque piece and the style kind of got stuck in my head. A phrase formed and kept playing over and over in my mind until I just played it on the guitar, worked out some backing and - hey presto - a chorus of sorts. I then spent a bit of time playing around with supporting chord sequences until this piece formed. The middle eight bit is a bastardisation of a snippet of a tune I heard on kids' programme my daughter was watching on Netflix.
It all came together quite quickly but, as usual, the title eluded me. I played it to my (then) 10 year old who said it made her think of lions and pumas. So there you have it: ladies and gentlemen, I give you 'Baroque Jungle'.

Flight To Freedom
I heard a snippet of a tune on the radio in the car that sounded a bit like the first bar of this song…the volume was very low and I was distracted, so it was probably a completely different tune and my brain filled in the blanks – but it was enough to set things off.
I knew it had to harmonise and I knew the song had to build, but beyond that I just fiddled away until something cohesive formed. I managed to incorporate the fill (in the middle and leading to the outro) that I’d had sitting around for ages and before long the piece was just sitting there, complete. I had no title but in my mind the music evoked escaping…flying…freedom. I think ‘Flight to Freedom’ fits well.

Andante Moonrise
This instrumental flowed almost instantly – it took about 30 minutes to develop. I’d taken a time lapse movie of the sunset and later moonrise of Mount Taranaki (New Zealand) from our deck in Inglewood and I thought I’d set it to music. I could ‘hear’ the opening bars as the sun set and I wanted something slow and soulful over the moving stars, so I put the opening bars through my looper...and just played. Then I harmonised, then did it all again; it just all seemed to fit immediately: what you hear is pretty much the first take.
The movie can be seen on my YouTube account here - it has Christian overtones so if that’s not your thing, I hope you just enjoy the instrumental here.

Secrets and Lies
This song had been sitting around dormant for years – but it wasn’t right. Then one day it just kind of opened up in my head and I _knew_ exactly how it went…all I had to do was record it. The title has a significance because the chord sequence reminds me of one of the less honourable encounters I’ve had in the past…

The Lord's Prayer (Instrumental)
You know this one. This is a song (well a prayer) that everyone of a certain age knows - and that everyone of a certain age will remember saying (or even singing in vague monotones) whilst in the school assembly in that old echoing wooden hall… We trotted it off like a mantra, very few of us actually listening to the words we spoke/sung.
I always have musical voices going on in my head that often distract me from normal life and recently in my musical 'schizophrenia' I heard a refrain in my head that seemed to fit with 'Hallowed be Your name' (I have no idea why I thought of that). Anyway I thought I'd try and make what was once a drone in school assembly more…interesting. Let's face it, a lot of 'religious' music is pretty pants (Stryper are a notable exception :D ) and that one isolated refrain eventually led to this song here. There is also a version with words on Soundcloud and Logamp ('cos I suppose you should be able to hear how I've re-interpreted it) but I'm very self conscious about my voice, so I prefer the instrumental version…I hope you like it

Call To Arms
Mellow(ish!) instrumental using lots of harmonising (mainly in 3rds). It started with me just playing around on the initial phrase and idly hitting the harmonise pedal which triggered all sorts of ideas in my head. I couldn't get them down quick enough! The song took literally 30 minutes to write and it's a corker to play - makes me smile every time!
I couldn't for the LIFE of me think of a title though, so I played it to my daughters - who are my biggest fans :) - and my (then) 10 year old said it sounded like it was representative of a battle going on. And so 'Call To Arms' was complete...

Turning The Tide (Baroque Moon)
Rock instrumental with a classical feel (with apologies to Messrs Handel, Vivaldi, Pachelbel, Mozart et al!)
I love the baroque musicians - and I especially love the stringed stuff. I was mucking about with those chord sequences and playing over the top of them and the first 'verse' happened. I got a bit stuck then (probably because the masters were quite good at it and I'm not!!) and it took a bit of time and difficulty for the rest of the track to get out and become cohesive, but I think I managed it in the end. I do wonder what the aforementioned gentlemen would think if they were alive today...

Satin Air
Rock instrumental that took _ages_ to write....no idea why. I like the track but some songs seem to just pour out and some are an extended labour of love...this was the latter. Technically I don't find it the easiest song to play and there is quite a lot in the track - but when you've practiced and you're in the swing and play it well, it sounds fantastic!

Mockingbird
Slower rock instrumental track using electro-acoustic BC Rich Mockingbird and American 1984 BC Rich Bich (as in: a proper Bernie Rico one!)
I was in a mellow mood and started playing slowly, with a bit of feeling and a lot of note-bending and this song developed. It didn't take long for the bones to form - the difficulty was in accurately bending one string to two different notes (up a semitone, then up two further semitones and then down to the main note), one after the other, accurately every time. It's called Mockingbird 'cos it's the first one I wrote using that guitar
Click here for a YouTube video where it is used as a backing track to a four minute film of one of my rescue helicopter flights as a medic

Jericho Road
A lively rock instrumental with a bit of harmonic minor, a bit of major and a bit more baroque... Not perfect (I'll redo it at some point), but I enjoyed playing it! It started with the first riff (on the A) and all of the undertones from there are _very_ simple. There really is nothing flash in the backing track! But I tried to steer clear of your typical pentatonic solo scales and put a bit of melodic minor in.
'Jericho Road' seems (to me) to sum up the slightly middle Eastern feel of the tune and the fact that the song takes you on a bit of a musical journey. The middle section was initially just something I had been playing with in isolation but it seemed to fit and gives the track a bit of 'light and shade'. I love the snap ending...I hope you like the song.

Trial By Fire
On 14th (or possibly 15th) May 2016, 22 year old sex worker/prostitute Renee Duckmanton was murdered in Christchurch, her killing linked to her profession. When this hit the news, I just remember feeling SO sad that this kid - and countless others like her -, barely out of her teens, had a) had to go into that line of work and b) had her life stifled and then snuffed out before it had really begun. She must have been miserable and terrified at the end.
I just sat down and played my guitar to try to reflect on that sadness and the first eight notes of this song are what came out. They were played slowly and slightly mournfully…it was just me expressing my feelings. I played that refrain for ages and gradually added bits that fleshed it out, until what you hear is what grew. The song has actually ended up at a quicker tempo than I'd originally planned, but it didn't work (as a whole) when it was slower.
I knew what the song meant but I didn't have a title. I again turned to my daughters - one of whom (then 11) said it was one of the best songs I'd written (so it must be true :D ). She also said that it sounded a bit like there were happy parts and sad parts and that it seemed to her representative of having to find a way through life. 'Trial By Fire' seemed most appropriate.
Rest In Peace Renee.

One Way
Not the best recording and written and gigged ages ago - but fun! It's a rock blues track that always went down well, was fun to play and was always popular (although it has a bit more intelligence to it than the standard I-IV-V format). Don't look for any hidden meanings - it's just a fun what-you-see-is-what-you-get song that makes you smile!

The Valley
So I bought a Boss RC 300 looper and had a play; the riff and music kind of just fell out and all I could hear in the back of my head over the top of it was this stuff I remembered from the Bible. I googled it and it turns out that it was from Psalm 23 ("...though I walk through the valley of the shadow of death" etc.)...and it seemed to fit! Not what you might expect...but I think it works :)

Aria
Upbeat rock instrumental that I particularly like playing for some reason. It started with the first four notes and there it stayed for a while until it gradually grew into what you hear now. A bit of a difficult birth, but the baby turned out all right in the end ;)
I know that the fade ins and outs aren't perfect and you'll spot a couple of mistakes...but you get the idea!

Be Mine
Meaty instrumental rock track in which I deliberately changed major notes to minor notes and vice versa. So what would have been the (starting note of) B major, I made into Bm (hence the play on the name - Be Mine) and dropped to the A, making that major; so B, A, E, F# became Bm, A, Em, F#. It made for a different backing track and the solo kind of played itself out. I think it sounds a bit dissonant in places - but maybe that's just me hiding my duff notes!

Back to Mark Belchamber's 'hub' page